Learn how to improve your defense at FIFA 15.

Your Best Defenders
Before you go to the game, you need to choose your best defenders for your starting eleven. Choose the ones with highest player ratings. Remember, defending (DEF), tackling (TAC), sprinting (SPR) and heading (HEA) are the key attributes as for the player ratings in terms of defending. Choose 4 or 5 of your best defenders with highest rating. My suggestion is to put players with better heading and tackling in Center Back (CB). Then choose the ones with better tackling trait on the sides (Left Back and Right Back).

Don’t forget that your midfielders also will help your defenders to prevent attacks. So, choosing the mid-field players with top DEF attributes will improve your defensive skills on the pitch. Having a few Defensive Midfielders in your starting eleven is a good choice, if you don’t want to have them in your starting eleven, it is recommended to keep them on your bench for critical situations.

Best Defensive Formation
It matters how many defenders you have in your defensive line, but what matters more, is how you’re going to manage your defense when your opponent is attacking to your goal. You need to engage all of players to prevent receiving goals, not only your defenders. Even your strikers should be involved with defending efforts. Therefore, you need to go for a formation that makes YOU comfortable to block your opponent’s attacks.

Know Your Weak Points
After forming up your team, you need to see how it works and what is your weakness. Go and play offline and online matches – For online games, I would suggest you to play unranked/friendly matches especially when you’re in Seasons or FUT 15 mode.

Do not ignore paying attentions to your weak points. Take note of the ways you receive goals. Whether it’s through a header from a cross, or a direct shot, the point is to recognise the holes in your defense and fix them. Figure out what causes you to receive goals, is it a silly mistake or it’s your lack of defending skills? Put them down altogether and make a checklist of it so you can go through them and fix them one by one. That is a key point for improving your defensive skills. 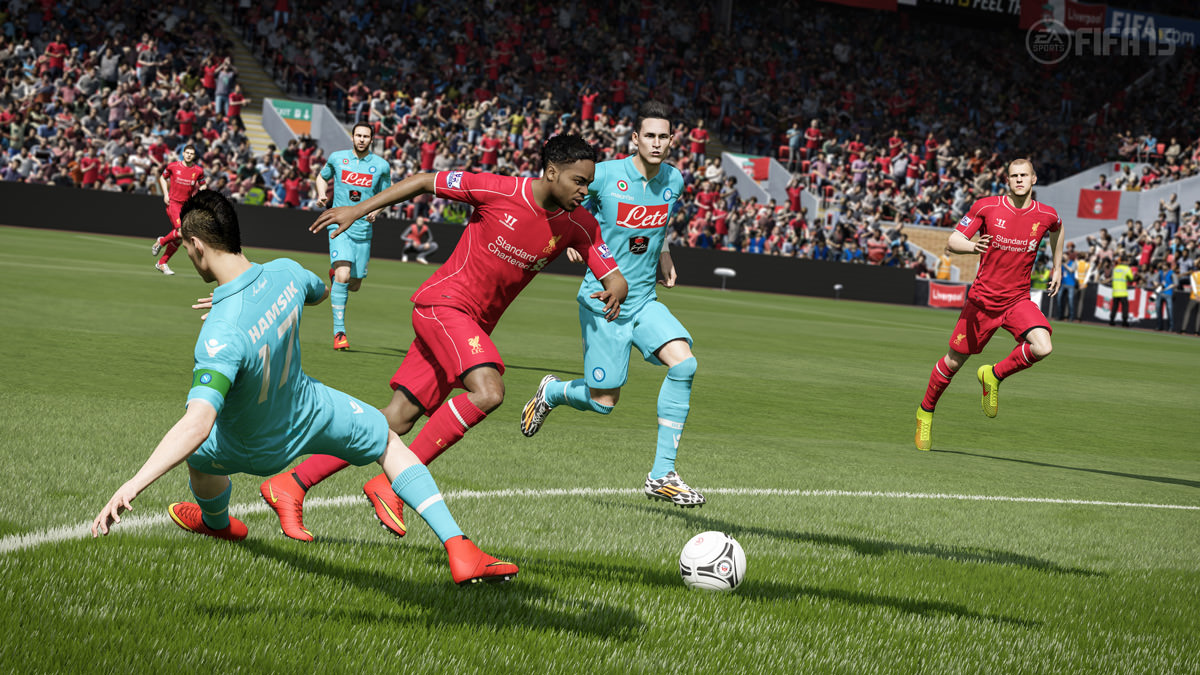 Man-to-man Battles
Try to win the most of man-to-man battles happening on the pitch. Block your opponent’s dribbling with short tackles, do slide tackles only when you are sure that you’re going to touch the ball not his legs.

Being patient is the key. Don’t get stressed. Even when your opponent’s attackers running to your goal with more players than your defenders, you don’t need to be stressed and confused. The only thing at that moment would help, is your ability to manage such a situation. Try to give your opponent a hard time, make them confused and narrow down their choices. Remember the time is crucial for them, and you need to buy time to ruin their attack. Focus on man to man battles and do short tackles to the players who carry the ball, and block off the ball players as well.

Do jockey to get other defenders involved to the situation. Sometimes, you need to just contain other players and go yourself to a player who is off the ball but is in a better situation to score. Sometimes, you actually don’t need to do anything, remember the CPU is controlling your defenders all the time and usually it’s doing a better job than you would do! So if you leave them to do the defending by themselves, you might finish up with a better result.

Win the One-on-one Situations
If you happened to have a striker running on the ball towards your goal with only your goalkeeper as a defender, you should be able to manage the situation to prevent a goal. The best way to do this is to make your opponent confused. As the attacker runs out of time (since most probably your defenders are running back to him), it would be a good solution to make him not come up with a decision. How? Maybe you can bring your goalie forward, but this method doesn’t always work, because the striker can make an easy goal by a simple cheap shot. So, the point is to make the striker unsure for what he is going to do. I usually bring my goalie halfway out to make striker confused. Most of the times it works. I bring the keeper off the line, but not very far from the goal post, so my opponent thinks that I’m gonna bring him all the way to go to his legs, so he makes a choice by either having a strong shot or a cheap shot – which usually neither of them is successful as my goalie isn’t far from the goal.