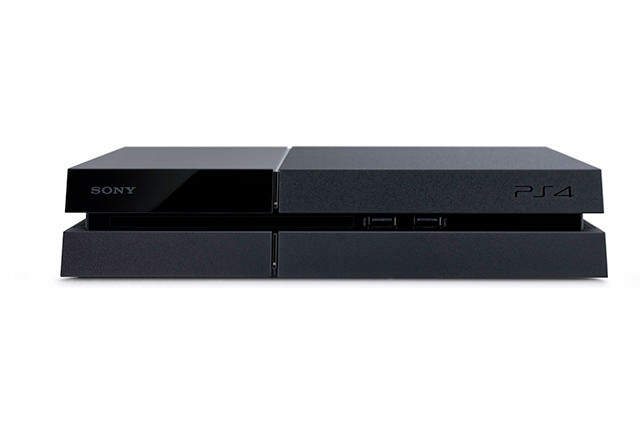 “We are proud to unveil today the most advanced gaming system ever created, PlayStation 4, which demonstrates everything PlayStation stands for — a relentless focus on the gamer, an inspired community of developers equipped with the most powerful technology, and the long-standing legacy to building worlds without boundaries through one-of-a-kind gaming experiences,” said Jack Tretton, President and CEO of SCEA. “What’s equally exciting for us, however, is transforming the PlayStation ecosystem into a stronger, more vibrant destination that enables gamers to engage, share, play, and connect on their terms.”

PlayStation®4
With a sleek, modern, and elegant look, the overall design of the PS4 system reflects the powerful yet accessible architecture of the system, which will inspire developers to unleash their imaginations and create the next generation of gaming experiences that were never before possible.

SCE World Wide Studios (SCE WWS) is currently developing more than 30 PS4 exclusive titles, 20 of them, including 12 new IPs, are planned to release within a year of the launch of the PS4 system. This demonstrates PlayStation’s focus on delivering original, creative content to gamers that will define next-generation gaming experiences. SCE WWS President Shuhei Yoshida provided an update on PS4 exclusive titles, #DRIVECLUB™, Killzone™ Shadow Fall, KNACK™, which will be available at launch, and inFAMOUS Second Son™, available first quarter 2014. He also unveiled SCEA’s next blockbuster title, The Order: 1886™, from acclaimed studio Ready at Dawn.

Furthering PlayStation’s commitment to finding unique games for its fans by working with independent and small developers, SCEA Vice President of Developer and Publisher Relations Adam Boyes introduced a stellar lineup of titles that will be making their console debut on the PS4 system, including: Transistor by Super Giant, Don’t Starve by Klei Entertainment, Mercenary Kings by Tribute Games, Octodad: Deadliest Catch by Young Horses, Secret Ponchos by SwitchBlade Monkeys, Outlast by Red Barrels, Oddworld: New N Tasty by Oddworld Inhabitants and Galak-Z by 17-bit. Boyes also unveiled blockbuster content from key publishing partners, including KINGDOM HEARTS III and FINAL FANTASY® XV from SQUARE ENIX, Ubisoft Entertainment, Assassin’s Creed® IV Black Flag™ and Watch_Dogs™, 2K Sports’s NBA® 2K14, Bethesda Game Studios’ The Elder Scrolls® Online, and the world exclusive unveil of Warner Bros. Interactive Entertainment’s Mad Max™. Bungie, one of the most celebrated developers in the industry, was also on stage to introduce the world gameplay premiere of Destiny™. SCEA announced a long-term exclusive partnership with Bungie and Activision that will ensure that the PS4 ecosystem evolves and grows with the incredible Destiny world.

PlayStation®Plus
SCEA also unveiled new details for PS Plus, built to bring games and gamers together and fuel the next generation of gaming on the PS4 system. With a single PS Plus membership, gamers will enjoy all of the program benefits across the PS4, PS3, and PS Vita systems.

The Instant Game Collection, which provides PS Plus members immediate access to a library of games — including blockbuster hits, innovative indie games, and classic titles — will extend to gamers on the PS4 system along with online gameplay, ensuring that gamers always have a selection of games to discover and enjoy with other members of the PS Plus community.

To celebrate the support of PS Plus on the PS4 system, SCEA will offer the #DRIVECLUB PS Plus Edition to PS Plus members which delivers all the authenticity and immersion users would expect from the full #DRIVECLUB experience, in the Instant Game Collection. In addition, one digital title will be rotated each month, including three of the new digital games introduced during the PlayStation E3 press conference, Don’t Starve, Outlast, and Secret Ponchos. These three titles will be available at no extra cost via the Instant Game Collection during the first year following the launch of the PS4 system. PS Plus members will be able to enjoy a variety of other amazing PS4 titles, while enjoying new ways to share their experiences with friends via online multiplayer, broadcasting and spectating games, cross-game voice chat, and the ability to seamlessly join a friend’s online game.

Cloud Gaming
SCEA also announced that PlayStation’s cloud gaming services will be available in 2014 beginning in the United States. The cloud gaming services will provide gamers on the PS4 and PS3 systems, followed by gamers on the PS Vita system, with immediate access to a catalog of critically acclaimed PS3 titles. These games will be streamed using Gaikai’s proprietary network technology to deliver amazing gameplay that is fast and responsive.

PlayStation®Vita
Since its North American launch last February, the PS Vita system has delivered the best and most immersive digital games that truly engage players wherever they are. With a vibrant 5-inch touchscreen, dual analog sticks and all new ways to play, the PS Vita system is the most powerful portable entertainment system ever created. More than 85 additional titles are slated to launch for the PS Vita system by the end of 2013, expanding the current library of more than 125 PS Vita-dedicated games and more than 400 classic titles from the PSP and PS one Classics catalogs.

Featured titles mentioned at the press conference include Batman: Arkham Origins Blackgate, CounterSpy™, Destiny of Spirits™, Doki Doki Universe™, Killzone™: Mercenary and Tearaway™. In addition, SCEA announced that God of War HD 1 and 2, Flower™, and Dead Nation™ from SCE WWS, as well as Square Enix’s FINAL FANTASY X and X-2 and Telltale Game’s The Walking Dead are coming soon to the platform.

The Walking Dead on PS Vita will feature a new control scheme that gives players the option to use the dual analog sticks and buttons or touch controls unique to the platform. To celebrate the title’s debut on PS Vita, SCEA will offer a limited-edition bundle that includes a 3G/Wi-Fi PS Vita, the complete first season of The Walking Dead game series (including the newly announced Season One episode, 400 Days) and great bonus content.

PlayStation®3
Now in its seventh year, the PS3 system continues to experience tremendous momentum, while delivering more entertainment value to consumers than ever before. The PS3 system will offer the industry’s deepest lineup of blockbuster titles, unique indie games, and exclusive “only on” PlayStation content this year, including Puppeteer™, Rain™, Gran Turismo® 6, BEYOND: Two Souls™, The Last of Us™, Batman: Arkham Origins and Grand Theft Auto V.