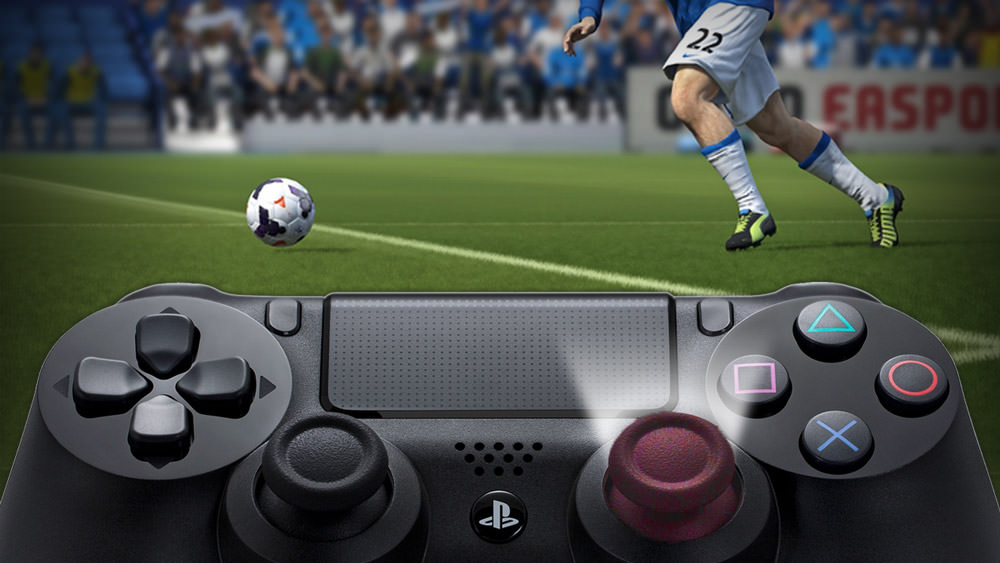 Darren Cross is here again to share with you five techniques for using the right stick to help you beat defenders in FIFA 14 matches.

Darren: Last week I scored my best ever goal in FIFA 14.

With a throw-in deep in my opponent’s half I lobbed the ball to my striker, who had his back to goal on the edge of the area with a defender marking him closely. The throw approached him at about hip height, so I used the right stick to flick the ball over my striker’s head – and over the defender – before spinning 180 degrees and volleying the ball right into the corner of the goal.

There then followed a lot of celebrating while shouting “Xbox record that” over and over. So my console is now holding around thirty versions of that goal, which was only possible because of the right stick.

I use the right stick a lot in FIFA 14. It has so many uses beyond skill moves that can really make a difference in matches, and in this week’s Backpage we’re going to look at five advanced right stick moves that help me get past defenders – including overhead flicks.

Double Knock-On
This is one of my favourite right stick moves yet one I rarely see other players using, possibly because not everyone knows how to do it or why it is so useful.

The double knock-on is when you push the ball out of your feet much harder than usual, so that it travels further away than a regular knock on with the right stick. It’s a fantastic tactic if you are dribbling with a fast player but about to come into contact with a stronger defender who will be able to shrug you off the ball using his power – going for a double knock-on here means you can accelerate without the ball at your feet, making use of your pace and avoiding any contact.

You can also use it to push the ball through gaps in defences or in just about any situation where there is space ahead of your player and you want to use his speed to your advantage.

Standing Push
I often use this move to avoid being tackled by an incoming defender when I’m receiving a pass under pressure.

It’s a quick push of the ball to take it out of your feet and away from the defender, who hopefully won’t be able to change direction fast enough to recover and make a challenge because of his momentum. When well timed it’s really difficult to stop and can buy you that extra few yards of space you need to escape the pressure and continue with your attack.

How?
As you’re about to receive a pass, hold the right trigger down and press the right stick in the direction you want to push the ball. Again you can do this in any direction you like, so try to aim for the biggest gap.

Stride Flick
Sometimes you can play a through ball and think your striker is through on goal, then he takes a poor first touch that slows him down a little and the defender catches up. It happens in the game just as it happens in real football, but there’s something you can do to give yourself a better chance of getting away.

You can knock the ball into your stride with your first touch, which will reduce the amount of speed you lose. It’s a really handy move and one I use whenever I’m about to run on to a pass and want to make sure the ball doesn’t get caught under my player’s feet.

How?
Just before your player takes his first touch on the ball, hold the right trigger and flick the right stick in the direction you’re going. One push of the right stick will knock it just ahead, but you can also use a double knock-on here if there is loads of room for you to move into.

Sharp Turn
This is another handy little move you can use to catch your opponent out.

In FIFA 14 you can turn very sharply while sprinting using just the left stick, but if you use the right stick to turn you’ll push the ball slightly further away, which is again useful for moving into gaps between defenders.

I mostly use this one when dribbling out wide while looking for the space to dart infield at pace, especially if I am using inverted wingers.

How?
While sprinting with the right trigger held down, push the right stick towards the space you want to move into.

Back-To-Marker-Flick
This is what I used to score the goal I mentioned earlier. In that instance the ball came to my player at the perfect height for an overhead flick, but there are many other ways this one can work and the kind of flick your player goes for will depend on the height he receives the ball. If it’s a low pass, for example, then he may try to just nudge it past a defender before turning.

The key to this one working is timing, the position of the defender – ideally he’ll be close so you can flick it past him – and a little bit of luck. This one doesn’t work every time, but when it does come off it looks great and can produce spectacular results.

How?
With your back to a defender, simply hold the right trigger down and flick the right stick in the opposite direction to the way your player is facing as you receive the ball.

They are five of my favourite and most effective right stick moves. If you’ve got more tips for using the right stick to beat defenders then please share them with other FIFA 14 fans by commenting below or tweeting me @darren_cross