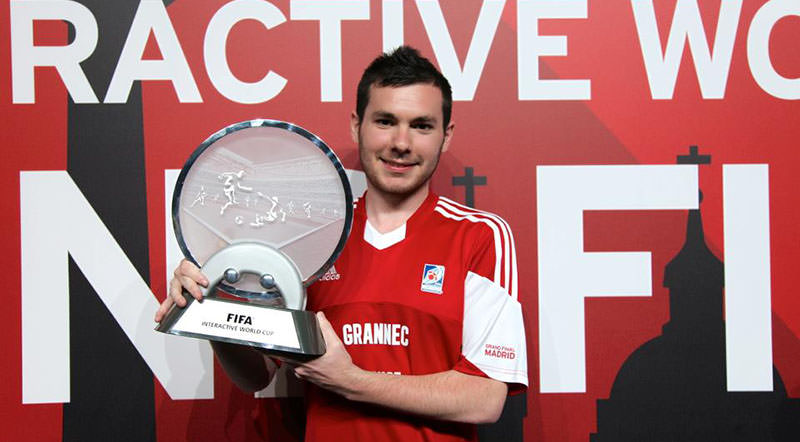 The 2013 FIFA Interactive World Cup (FIWC) has wrapped up in dramatic fashion with Bruce Grannec of France claiming a second world title after beating Mexico’s Andrei Torres Vivero 1-0 in a tense finale in Madrid on Wednesday 8 May. Grannec, who adds to his 2009 crown, will take home a cool 20,000 USD in prize money and enjoy a trip for two to the FIFA Ballon d’Or 2013, where he will rub shoulders with the biggest stars in world football.

The victory is made all the more impressive considering the 2.5m players who participated in the FIWC 2013, making this the mostly fiercely contested online gaming tournament ever.
Ralph Straus, FIFA Head of Strategy & Brand Management, says he was impressed not only with the skills on show but also the level of support from the wider FIWC community, as the three-day Grand Final streamed live via FIFA.com and FIFA on Youtube.

“It has been a thrilling competition and we congratulate all 21 grand finalists, in particular Bruce Grannec for emerging as world champion,” Straus said. “The FIWC continues to be a platform that gives fans across the globe an opportunity to participate in a FIFA World Cup event and become a true world champion. We are excited about planning for the tenth edition of the competition in 2014 with the support of presenting partners EA SPORTS™ and Sony PlayStation®.”
The final showdown followed an announcement earlier in the day that FIFA and EA SPORTS™ will extend their existing licensing agreement until 2022. Oliver Hughes, International Marketing Director for EA SPORTS™, says the FIWC is an important element of that agreement.

“The success and popularity of this year’s FIWC is evidence of the close partnership between EA SPORTS™ and FIFA as we strive to reach new heights in the world of gaming,” Hughes said. “We look forward to continuing that relationship and finding innovative ways to give players the best possible virtual football experience.”

Nick Caplin, Head of Communications Sony Computer Entertainment Europe, says he was delighted to see the passion and excitement from the players, most of who qualified through the six online qualifying seasons.

“The online qualifying seasons, played through the PlayStation® Network, have become a crucial component of the FIWC,” Caplin said. “We’re delighted to provide this support and see the tournament participation numbers continue to increase exponentially since the online playing mode was introduced for the FIWC in 2009. To reach 2.5 million participants is an incredible achievement.”