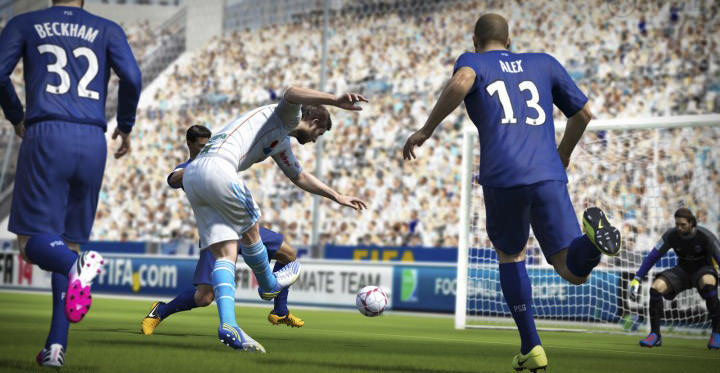 Over the years I tried many times to move away from a strike partnership and get to grips with having just one player up front, as I always liked the extra numbers in midfield, but I just couldn’t get used to not having two players leading the line. I often felt like it just wasn’t attacking enough for my playing style, or that having a lone striker was just too much hard work.

Then I got thrashed by a very good player using the 4-2-3-1(2) and that was the kick-start I needed to try again. As you’ll see if you click on that link, it went really well for me and I’ve been using that particular formation regularly ever since.

As I improved with the formation I gradually began to learn how to use the lone striker more effectively, and now I feel like having a single player leading the line can be just as attacking as a pair of forwards, more so perhaps because of the options for linking up with other players and generally causing havoc.

Pick The Right Striker
Once you’ve decided to use a lone striker formation, next you need to select or sign a forward with the right attributes for the job you want him to do.

What those attributes are will partly depend on how you like to play – if you mostly try to cross the ball then you’ll want a forward with height, strength and good heading stats, but if you prefer to look for through balls over the top then you’ll need a player with pace and stamina.

If your striker’s skills don’t compliment your style of play then you’re going to find it more difficult to use him effectively.

Generally I do better with lone strikers that have a physical presence and good technical skills, for reasons that will become clear later on in this article, and if they have a bit of pace as well then that can be an advantage.

Avoid Isolating Him
No matter what formation you’re using, it’s important to resist the temptation to charge forwards at full speed every time you win the ball back. While there are of course times when a quick counter attack is the right option, always looking for a forward pass and rushing your advance will usually just isolate your strikers, and in formations with just one forward that’s a huge problem.

Keep an eye on what’s happening around the ball and use the radar when your opponent is attacking so you can see where both teams’ players are, which will help you make a quick decision as soon as you regain possession. If the opposition have pushed too many men forward and you have a lone striker with pace then sure, go for the counter. But if they still have a number of men sitting deep behind the ball then a slower approach will probably get you better results.

Stay In Position
With just one striker up there leading your attacks, it’s absolutely vital that you keep him in the right position as much as possible. If you don’t then attacks can break down fast and you may find yourself under pressure again quickly.

When the other team have the ball at the back then your striker is your first line of defence, but you must avoid having him chase the ball down in wide areas or, worse, sprinting all the way back deep into his own half. If you do use him to apply pressure in the wrong places then not only is he likely to be out of position and unable to affect the game when you win the ball back, but he’ll also tire a lot quicker.

Keep him central, keep him forward and save his stamina – let his team-mates do the chasing by switching control to them as soon as the ball moves out of his zone of play.

Protect The Ball
Because there’s only one forward to concentrate on for the defending team, your striker is likely to be outnumbered and under pressure pretty much constantly.

Even when you build your attacks patiently and create opportunities to get the ball into the striker in advanced positions, once he receives it he’s likely to have defenders all over him before you can say man marking, and often that will happen while he has his back to the goal.

That is why it is essential to be able to evade tackles and protect the ball.

We looked at some effective ways of beating a man marker in this column, so take a look at those if you haven’t already because they work really well for me. You’ll also find tips there for using LT or L2 to protect the ball, which is another very useful tool to use with a lone striker. Sometimes, if you do find that your striker has become isolated because the attack has advanced too quickly for example, protecting the ball in this way can buy you enough time to wait for support and recover your team shape.

Physical presence helps here, as does technical ability. If you have the power to hold defenders off or the ball control, agility and dribbling skills to avoid them, then keeping the ball and combining with team-mates is going to be much easier.

Link The Play
During the build-up play my striker is always dipping in and out of the action, receiving the ball then playing it to another nearby team-mate so that the attack can advance and he can move into a better position further up the pitch.

That’s quite different from using a strike partnership, as a pair of forwards will link mostly with each other using one-twos, through balls and knock-ons. In a lone striker formation your frontman will be linking up with wingers, a CAM and possibly a couple of central midfielders, often with his back to goal and – as we’ve just looked at – while under a lot of pressure, so it is a different role and does take some getting used to.

The ultimate goal of course is to be able to get your striker on the ball in a dangerous area with the time and space to shoot, and that’s going to be much easier if he’s constantly moving with and without the ball while linking with team-mates, rather than trying to lone wolf it. It’s another reason why it’s a good idea to keep an eye on what’s happening off the ball as often as you can. This will help you quickly identify team-mates in space that your striker can link with, and gaps on the pitch that you want to direct your attack towards.

I’ve found that the better I’ve got at linking my striker up with other players, the more successful I’ve been with using single striker formations.

As always, thanks very much for reading.