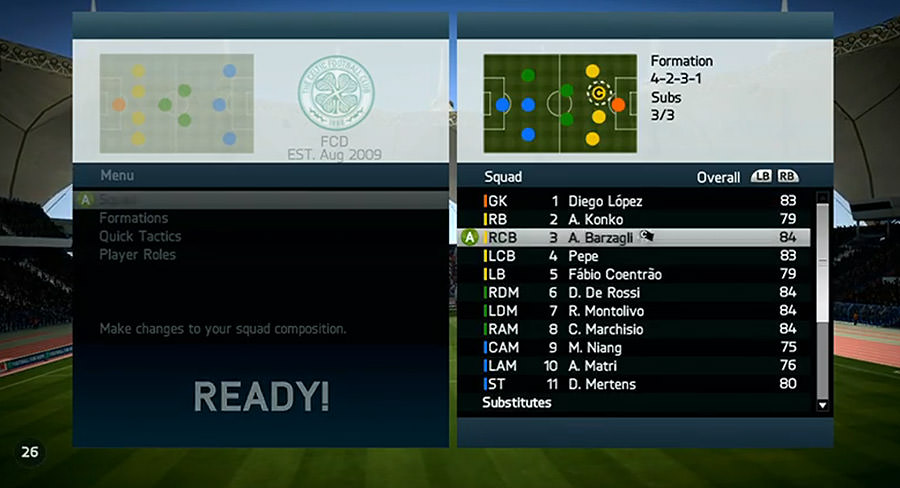 FIFA fan and real football journalist, Darren Cross is here to give you FIFA 14 tips on switching to the 4-2-3-1(2) formation and how it helps you win more FUT and FIFA 14 matches.

Before FIFA 14 was released, the wide version of the 4-1-2-1-2 was undoubtedly my favourite formation. I knew where the players were at all times, felt very comfortable with the shape of the team and liked how I could easily change my playing style during games without having to switch to a different formation. I always felt like I had plenty of options in attack and enough numbers back to handle defence – it seemed a formation with very little weaknesses.

Then, a couple of weeks into FIFA 14, I played someone in a FUT match who was using the new 4-2-3-1(2) and they absolutely took my team apart. When I was attacking I really struggled to find a route through the two holding midfield players and the back four, and when I was defending I always felt one step behind as my opponent caused havoc with patient, unpredictable passing and fluid link-up play.

I had used similar formations many times before and often felt like they didn’t quite fit my playing style completely. They just seemed a bit too cautious for me, like there weren’t enough forwards to play with my favoured attacking approach. But this defeat completely changed my thinking on that as I witnessed – which was pretty much all I could do – my opponent create chance after chance.

I decided there and then to give the 4-2-3-1(2) a real go myself and concentrate on using it in the same way, with lots of passing through my midfield and plenty of movement and link-up play between my main attacking four.

Five high-scoring FUT wins later, and with no goals conceded, I had a new favourite.

I must have played well over a hundred games with it online since then and it’s still my number one formation by a million miles, so in this week’s Backpage I thought it might be useful to take a closer look at the 4-2-3-1(2) and how I use it.

If you’re considering changing formations to try something new or because you need to pick up more wins, read on to find out why I think it’s really worth giving this one a go.

When you’re defending, the two holding players make it difficult for opponents to attack through the centre while your wingers will drop back to support your full-backs. The CAM will even help out too at times, so you’re well covered pretty much everywhere defensively.

Once you win the ball back the CDMs will move forward into more central midfield positions – giving you five across the middle when you include your wide players and your CAM, who should operate like a number 10 in the gap between your lone striker and his team-mates.

So you’ve got plenty of players helping out in defence and, if you give them all a chance to join in with the play, six or more players pushing forward for the opposition to think about.

Style Of Play
With the exception of a quick counter attack here and there, I generally go for a patient, attacking style of play with lots of passing as I gradually advance and look out for gaps opening up. The 4-2-3-1(2) feels perfect for this kind of approach as there always seems to be team-mates in space close by when in possession, which makes it tougher for the opponent to know who you’re going to pass to next – one of the main reasons why I struggled to defend against it with a 4-1-2-1-2 myself.

It’s not really a formation that suits a very direct, rushed style of play in my opinion, as passing forward too quickly can isolate the lone striker, who will probably be tackled if the other team already have numbers goal-side.

When I talk about a patient style of play I don’t mean everything should be done slowly – quick passing is fine as long as it isn’t always forwards no matter what. Sometimes you need to play back or to the side in order to eventually advance, and with the 4-2-3-1(2) you should find there’s usually an option to do that somewhere.

One of the other things that really stood out for me when I struggled against this formation was the movement of the wingers and the way they linked up with the CAM and the ST. They moved quickly and fluidly into the gaps by exchanging one-twos and short passes with each other – it really was difficult to mark them effectively.

I wanted to use them in a similar way but with the added threat of goals from distance, so I specifically signed inverted wingers – righties on the left and lefties on the right – who could hit good shots from around the edge of the area. So now my approach with the wide players is to give them the ball whenever they’re free and head infield towards my CAM and ST, where I should be able to create space with quick, short passing or test the keeper with a shot. To mix it up I’ll occasionally start to go infield then head back out wide and bring the full-backs into play, but in the main I try to get the wingers on the ball and linking up with team-mates while I look for space.

As with any formation and style of play, the important thing is to have the right players for the jobs you want them to do, which brings me on to…

Player Roles
Although I’ve hardly mentioned him so far, one of the key players in the 4-2-3-1(2) is obviously the striker. If he has the attributes that match your style of play then you’re going to find things that bit easier, so that’s something worth considering before you spend those hard-earned coins in the transfer market.

Because my striker gets involved with the link up play he must have decent ball control and dribbling, along with the pace to get away from defenders and the finishing ability to make those chances count. Heading skills can be handy, but since I don’t cross all that often it’s not essential for me. Of course, if you prefer to cross a lot then you’ll want your striker to have complimentary attributes like heading accuracy and strength – pace and dribbling may not be as important.

The CAM can be easily surrounded in this formation so he also needs good control and dribbling skills, and I think great passing ability is essential too. I also tend to go for a CAM with good long shots, preferably with both feet, as he does seem to get a couple of shooting opportunities in every game.

Whether you want to go with inverted wingers like mine or players that will stay wide and go for crosses, it’s important to have good pace and dribbling skills. If you do prefer to cross than head inside then go for right footers on the right and lefties on the left, as this will make it easier for you to get those crosses in.

My CDMs are both all-rounders – strong and quick enough to help out in defence with the passing ability to make a difference in attack. A good long shot rating doesn’t do any harm here and heading ability can help at both ends of the pitch too. They see a lot of the ball in this formation, so make sure you get quality players for both positions.

I like quick, attacking full-backs who will get forward to give me options and I find that the taller they are the better. My full-backs often seem to get drawn into aerial battles, so the extra height and strength helps.

I don’t think it matters too much what kind of CBs you go for – just stick with your personal preference. I like them to have enough pace to compete with fast strikers, plenty of strength and good heading ability.

We all have different playing styles so this isn’t a universal formation that will definitely suit everyone – one of the best FIFA players I know doesn’t like it at all because of the lone striker – but using it in the way I’ve described here has really worked for me.

Give it a go in friendlies with the players and style above to see what you think – you might just end up with a new favourite.