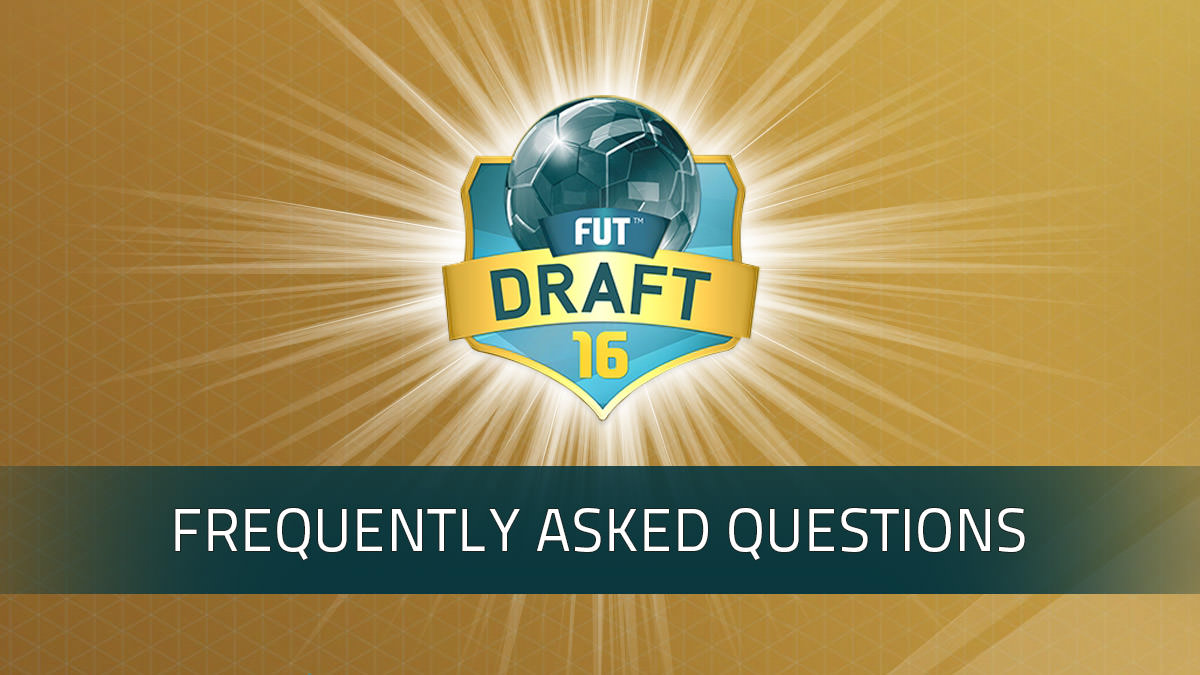 The answers to FIFA Ultimate Team Draft’s frequently asked questions. If you have a question and you can’t find its answer here, post your question to us using the comment form below, we will try to find the best answer for you.

What is the FUT Draft Mode?
FUT Draft is a new competition mode in FIFA 16 Ultimate Team which allows you to play FUT as single player or online mode in a 4-match competition with a new squad which is formed with some players and manager that are given to you from a random selection by the system. A FUT Draft mode series has 4 matches, each match is awarded with a prize. To learn more about FIFA 16 Ultimate Team Draft mode, read this article: www.fifplay.com/fut-16-draft.

Why It Is Called Draft Mode?
As a competition mode in FIFA Ultimate Team, FUT Draft mode allows to build a squad for your club from the scratch with a random set of high quality players which you may not already have their cards in your club. Draft mode gives you an opportunity to experience building a high quality squad while you can learn about the team & players chemistry, formation settings and in general, forming a good team in FUT. Technically, Draft mode is a test drive for you to see how which players from which leagues and nationality you can go for to form a FUT squad. In FUT Draft mode, you don’t spend coins/points to get player cards – except for the competition entry, this will help you to draft out a team in action and improve your knowledge of how to fit the players in a team, as well as how to improve your gameplay with that team while you are achieving prizes and earning coins.

Who Can Enter FUT Draft Mode?
Everyone who has a FUT Club is eligible to enter the Draft mode by either purchasing it for 15,000 coins / 300 points, or redeeming a FUT Draft mode using a Draft Token found in packs.

Can I Use my Own Player and Manager Cards for FUT Draft Matches?
No. You are only able to use the players and managers which are given to you by the system in FUT Draft mode.

Can I Change my Squad’s Formation During FUT Draft Mode Matches?
No. The formation you choose before finalising your squad will be your primary formation and you will not be able to have a secondary one.

Is a FUT Draft Token Tradeable?
No. Draft Tokens are only to redeem and can not be traded in the Transfer Market.

Who Are My Opponents in Draft Mode Matches?
If you are playing FUT Draft Single Player mode, the teams you will be playing against are real clubs from FIFA 16 teams controlled by CPU. In FUT Draft Online mode, you will be facing the other FUT Draft mode players who are connected to EA online servers.

How About the Disconnections During FUT Draft Games?
Disconnections in Draft mode matches will follow the same DFN rules as FIFA 16’s.

Are My Draft Mode’s Players Tradeable?
No. The players you’re receiving in FUT Draft mode are only available in the Draft mode and they won’t go to your Club, which means you won’t own them.

What Are Draft Mode’s Prizes?
FUT packs and coins.

How Many Times I Can Play the FUT Draft Mode?
To be announced soon.

Are Items Inside FUT Packs as Draft Mode Awards Tradeable?
Not confirmed yet, but they are supposed to be tradeable since you are purchasing the competition.