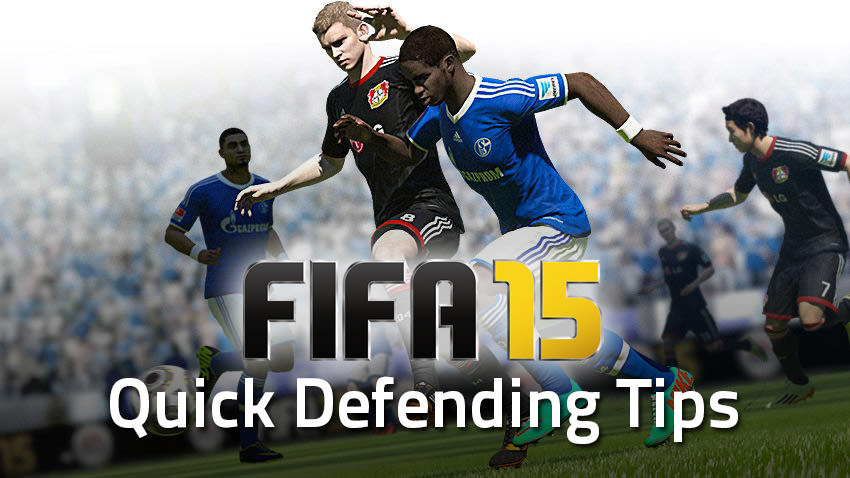 FIFA fan and football journalist, Darren Cross is here to give you some defending tips to help you keep it tight at the back in FIFA 15 and FUT 15.

Darren:
FIFA 15 is here and there is tons for fans like you and me to talk about. Over the next few weeks on the Backpage we will look at great Career Mode players to sign, top teams to use in Seasons, effective formations, bargain FUT squads, set-piece tactics and loads more, so make sure you pop back every week.

To kick off the new FIFA season I thought it would be handy to quickly cover what I think are some of the most useful pointers for effective defending in the new game, followed by some attacking tips next time to help you score more often. I say ‘quickly’ as I know you’ll want to get back to actually playing as soon as possible, but also because it hopefully won’t take too long for the tips below to make a difference if you’re struggling to keep the ball out of the net.

With that in mind, let’s start with what I think is probably the most important thing to think about when defending in FIFA 15.

Positioning
Keeping your shape, taking up good positions and not diving into tackles was important when defending in FIFA 14, but in FIFA 15 it’s absolutely essential if you’re going to keep the goals out. Thanks to a number of attacking improvements, which we’ll take a closer look at when we focus on attacking next time, opposition players are more mobile with the ball at their feet so it’s easier for them to jink past defenders that rush in too quickly or go flying into tackles.

For that reason it’s vital that you resist the temptation to press too often and too aggressively with any of your defensive players, especially your back line. That can be easier said than done – I still hunt the ball at the wrong times every so often – but if you can break the habit and concentrate on your positioning then you should find you concede fewer goals overall.

In terms of positioning, the most important players to keep your eyes on are your centre-backs. Try to completely avoid stepping one or both of them out of your back line to actively go and attack the ball, because if they’re rushing towards it then the forward needs only to change direction to use your CB’s momentum against him, taking him out of the move for long enough to leave a big gap where he just came from. Instead, make the forward work to beat any of your players by taking up a strong defensive position between the ball and your goal, facing the play. The key thing here is holding that position rather than moving towards the ball, so that you’re able to react quickly to any changes of direction because you haven’t got your own momentum to correct first. If you do need to apply pressure on the ball then use the team-mate contain function so you can concentrate on keeping your CBs in the best positions while an AI-controlled player presses the play. 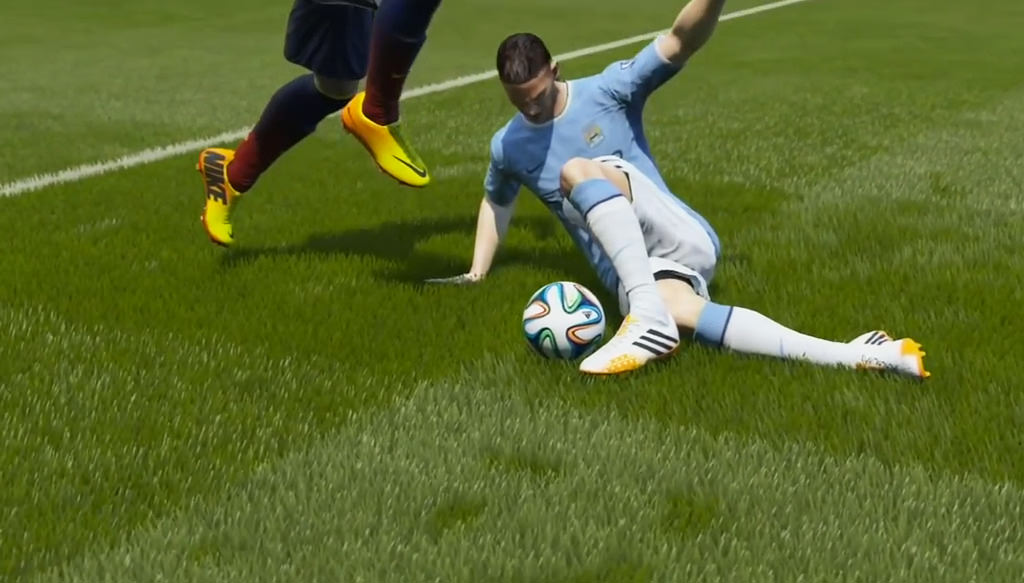 Tackling
When tackling, avoid chasing the player and swiping at the ball with constant standing tackles, and save sliding tackles for times when you have no other options. Try to use your positioning and body strength to win the ball without making a tackle if you can – either by holding your position then moving into the path of the ball so the player in possession runs into you or, if you’re side-by-side, by using the left stick to move between the ball and the forward. A short press of the push/pull button can really help to get you into a better position here, too. Just don’t do it too often in quick succession or you’ll concede a foul.

Use a standing tackle when you’re very close and you’re as sure as you can be that you will make contact with the ball. If you miss it and you’re too far behind the play to recover, switch to a defender closer to your goal and try to fill the gap without creating a new one until your team-mate is back in position. Just remember not to rush out with your CBs. I only use sliding tackles to block shots that I would otherwise not be able to get to or as a last resort.

Sprinting
Something else I still catch myself doing here and there is sprinting with a player that’s just too far away from the action to make a difference, and in FIFA 15 that is bad news. Players seem to tire faster than in previous versions if you run them everywhere at full speed and the effects of fatigue can cost you in the latter stages of games, either because they won’t have the stamina to keep up with the opposition or they will pull up with injuries.

Save sprinting for when you really need it, maybe to accelerate and intercept the ball or to keep pace with a striker. Constantly holding the button down when you’re defending will not only sap your stamina but could also cause you to rush into tackles, which as we’ve already talked about is something that must be avoided.

Playing It Safe
One of the best defensive tips from FIFA 14 is still just as relevant in the new game – take no risks at the back.

Playing out from defence can feel very satisfying, and moving the ball around your back four, bringing a high ball down with a centre-back, playing a short pass with your keeper or heading a cross to a team-mate is fine as long as there are no opposition players nearby. But if you do concede possession in your own third of the pitch then it can only take a second or two for the other team to punish you with a goal, so play it safe when under pressure at the back.

Always use the shoot button for defensive headers in your own box when there are opposition players around, and press the same button to clear a dropping ball first time if you’re running towards your own goal with a striker for company. Don’t be too proud to play a pass back to your goalkeeper rather than risk a flash turn with a defender, and never try to dribble out from the back with your CBs. Keep the passing simple and play the way you’re facing so you can keep the ball moving quickly, and avoid trying to pass across your own penalty area. I’m not suggesting a long ball game here – by all means play the ball out from the back when it’s safe to do so – but unless you’re certain that what you want to do is going to work, it’s safer to choose another option or get the ball away from your goal and regroup.

We’ll look at more defensive tips in greater detail in the near future, but for now I hope these pointers help you out if you’ve been a bit leaky so far.