Michael Mueller-Moehring (Also known as MMM or Triple M) is producer for the internal database group, and is responsible for collecting and verifying of the football data at Electronic Arts.

Would you please introduce yourself first for FIFPlay visitors?

MMM: My name is Michael Mueller-Moehring, I was born in 1967 in the wonderful city of Cologne in Germany – my specialty is football knowledge. Besides, I was the first person to complete the Panini World Cup 2006 sticker album in North America. I reckon.

What is your position at EA, and what are you doing excatly there?

Michael MM: I am working at EA Sports Canada as a Producer for the internal database group, and am responsible for collecting and verifying of the football data there. I have worked for EA for three-and a half years, I started with EA Germany in Cologne where I was 2004 and 2005 involved at the development of the FIFA-Manager video-game. In April 2005, I went to Vancouver and started to work directly for EA Sport’s Canada.

Do you play FIFA at your pastime?

MMM: Occasionally. If you are working the whole day on football and computer games, then you would try to do other things in your leisure time. I like to go jogging, I think this is a very good balance for that. But when I want to play computer games, I prefer to play a Fantasy or a role-playing game. But occasionally I play a FIFA match. I am however not very good.

Michael, I heard you have written some books before, is it true?
MMM: Yes, I have actually published some books about football.

This book is a guidebook for soccer fans, who want to find out, what is the best way to go into the stadium. It also helps them to get most important information regarding away stadium etc.
Furthermore, I made an almanac for Bundesliga, an international stadium leader, a book about Ice-hockey and almost 25 bag calendars for clubs like FC Bayerm Munich, Borussia Dortmund and Duisburg. 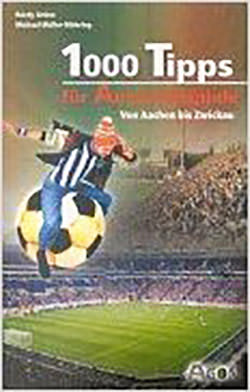 A book written by Micahel Mueller-Moehring for football fans, who try to find out, what is the best way to go into the stadium.

Michael MM: My favourite club is Fortuna Koeln who used to play in the German 2. Bundesliga for a veeeeeeeeeeeeeeeeeery long time – we are still in the lead of the 2. Bundesliga’s eternal table. But in the last years we ran out of luck, and so we struggle in the Verbandsliga Mittelrhein. That’s division five. Sigh. My favourite player of all times is Juergen Niggemann who played a long time for Fortuna. He is not very known outside (and actually also inside) of Cologne but he was great.

If you were the producer for FIFA, which key feature would you add to this game anyway?

Michael MM: I’m not sure. I would potentially try to add so many features that all my engineers and artists would kill me right away… 😉

Our current voting poll at FIFPlay is about adding a new league to FIFA 08. There are these four leagues: Australian, Argentinian, Iranian and Russian … which one you would choose and why?

Michael MM: Argentina – because they simply play a very interesting and exciting football over there. Next would be Russian then Iran and finally Australia.