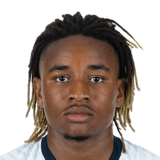 Christopher Nkunku is 22 years old (Born on 1997-11-14) and his FIFA Nation is France. He is now playing for RB Leipzig as a Central Attacking Midfielder (CAM). His FIFA 20 overall ratings for this card is 90. He is Right-footed and has a 4-star skill moves rating. Christopher Nkunku's height is 179 cm.

This Christopher Nkunku's card is a FIFA 20 Team of the Season So Far Gold card and is available in FIFA 20 Packs.