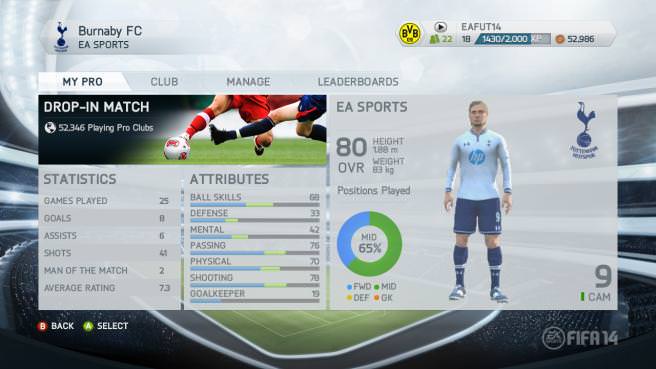 Based on the feed from the FIFA community, a number of changes are coming to Pro Clubs in FIFA 14. Pro Clubs lets you compete with friends and other FIFA 14 gamers in up to 11v11 online play. Battle through 10 Divisions and grow your online Pro, earning accomplishments and unlockable items as you progress. Will you become a legendary Pro?

Accomplishments and attributes
By looking at players currently competing in the world’s top leagues, attribute levels have been re-tuned to balance physical traits such as height and weight. Previously, there were more advantages and drawbacks to how you create and edit your Pro, and the effect that has in the game.

The overall peak of Virtual Pros has been reduced to be more realistic, making players at the top end feel less overpowered.

There is a new stats screen for your online Pro, featuring match rating form charts, overall stats, and the ability to sort by position.

Fixes have been made to the appearance of CPU players. Now, they are correctly based on your region.

A huge request involved kit numbers, and thankfully players will be able to keep those numbers in game.

User Interface
Like the other aspects of FIFA 14, there is a new menu layout to help navigation and additional content and statistics has been included.

A revamped Club invite system removes the old hidden system, and now features a transfer screen built into the mode, including showing all your requests as a player and manager. Invites also appear in your EA SPORTS™ Football Club (EASFC) hub as Alerts. Additionally, there is also the option of recommending your club to other friends if you aren’t a Manager.

Within the menu, you can now view other clubs (either through search or match history) and see their current season, trophy cabinet, or request a transfer.

There is also now the option of creating/editing/searching clubs based on ‘Positions. This allows for players to search or attract players based on the position they play. Additionally, the “Search Clubs” screen displays recommended clubs based on skill, language, Pro position, etc. Meanwhile, friend’s clubs are located on a secondary tab for easy access.

Drop-In Matches
Some attention was spent on Drop-In matches this year, as many have enjoyed playing before they have a club, or if teammates are offline. The first step was removing “ANY” Drop-In Matches, as it tended to result in a less enjoyable experience for the other teammates.

In a similar vein, the number of users possible is reduced to 5v5 matches to allow for more touches on the ball and to get help ensure your preferred position is played. 11v11 matches with random people can be chaotic without proper teamwork and knowledge of your teammates, while 5v5 is a more controlled and enjoyable experience.

In terms of presentation, new uniforms have been added, while stadium atmosphere has been reduced to make it feel more authentic. Drop-In Matches no longer use the real league team kits or stadiums. It seemed out of place for Virtual Pros playing a Drop-in match to be wearing the kits of a professional club, playing in a 60,000 seat stadium.

Organising games
Getting teammates together to play a match can be challenging at time. Via EA SPORTS Football Club (EASFC), you can now send messages to all Club members online even if everyone is playing in different modes. Teammates can navigate to EASFC in game, accept the invite and then are taken to the Match Lobby.

The kit selection step after matchmaking has been removed (you can’t back out at this point anymore when you see your opponent). Instead, you choose your kit before searching; if we recognize a potential kit clash with your opponent, they will appear in a different kit on your screen. You always see the kit you chose, and they always see theirs.